Every day, our troops in Afghanistan put themselves in harm’s way in order to spread, protect, and preserve Democracy.   Many Tennesseans are on the ground in Afghanistan in this fight.  With God’s help, just like the song says, “everything’s gonna be all right.”   I can say this with confidence knowing that one fellow Middle Tennessee Rotarian, Neal Beard from Lawrenceburg,  is there leading the way. 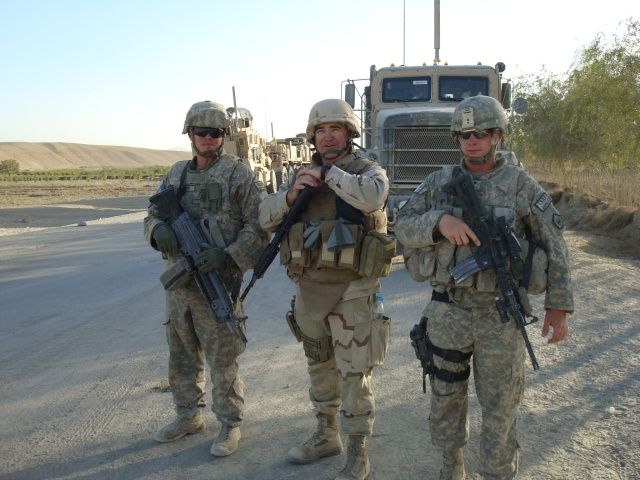 In years past, Neal has been responsible for the planning and coordination of annual mission trips to the Choluteca region of Honduras, on behalf of his Lawrenceburg Rotary Club and other Rotary Clubs throughout Middle Tennessee and Northern Alabama.   Having participated in these missions, which provided fresh water wells and electricity to impoverished villages throughout Honduras, I can tell you first hand that with Neal Beard in Afghanistan, everything really is going to be all right.

Here is a Veterans Day message written by Neal:

On November the 11th we will observe Veteran’s Day and recognize the contributions of America’s heroes who have served and continue to serve our nation.  Our nation exists today because of the sacrifices of the brave men and women who have gone before us.  Our way of life, and the freedoms we share, is so important that we, as a nation and as individuals, are willing to risk our lives and expend valuable resources to ensure that innocent men, women and children all over the world have that same right to live free from oppression and abject poverty.

That is why my grandfather and his generation deployed to Europe in 1918 to shiver in the cold trenches along the Western Front while massive artillery rounds exploded all around them.  Because of their commitment and courage, they were able to slowly push back the conquering armies of Germany in what was then the most devastating war in the history of the world.

It is why our “greatest generation”  (as Tom Brokaw accurately called them) boarded troop transport ships bound for places like El Alamein,  along the African Front; Normandy,  Anzio, and Dunkirk along the European Front; and distant battle fields in the Pacific like Guam, Saipan, and Iwo Jima.

It’s why my father’s generation served in the cruel cold climes of Korea and my uncle and cousins sweltered in the hot humid jungles of Vietnam.

It is why we massed armies across the dry desert dunes of Saudi Arabia to free Kuwait from the clutches of a sadistic despot in Iraq; and again when we massed against the same despot when he threatened the lives of peoples within the borders of Iraq who desired to follow an opposing view of the Islamic faith. His hatred for America led him to support and provide a safe haven to the same terrorist responsible for the murder of thousands during the attack on the World Trade Center.

It is why we are here today in the remote mountains and deserts of Afghanistan carrying that same fight for freedom to the extremist of Al Qaida and their Taliban supporters; extremist who are not only committed to the subjugation of the nation of Afghanistan, but who’s hatred for America continues to smolder as they plan and plot ways to harm, if not destroy our way of life.

I have the distinct pleasure to be serving in this war as the Command Master Chief (Senior Enlisted Leader) for Task Force Keystone under the command of THIRD Naval Construction Regiment (Seabees).

Task Force Keystone is made up of over 5,300 Air Force, Marine, Army, and Navy engineers spread across Afghanistan.  Our engineers are clearing routes by locating and destroying Improvised Explosive Devices (IEDs).  They are building remote command outposts (COPs) and forward operating bases (FOBs).  They’re erecting watchtowers and observation post along major roadways and supply routes.  They’re building roads into insurgent dominated regions that allow our war fighters to engage the enemy and either destroy, capture, incapacitate, or restrict their ability to wage war and inflict terror.

Our engineers are erecting buildings and constructing utility infrastructures like electrical generation facilities and distribution lines.  They are drilling water wells and repairing or constructing roadways and bridges that improve this nation’s quality of life.  Their efforts provide critical resources for growth and development and ensure safety and freedom of movement for the local populace and coalition forces.

We are making a difference in the lives of innocent Afghanis today, tomorrow and for generations to come. The work we are doing here, at least for most of us, is the most important thing we have ever done in our lives.  The same has probably been said by every veteran who has ever served in any war.  It is an honor for us to lift up the torch of freedom, which has been passed to us from the tired trembling hands of all of those veterans (heroes) from past wars, and carry it forward into today’s battle.

It Has Always Been The Soldier:

Trey Lewis is a licensed Real Estate Broker in the State of Tennessee with Ole South Realty, 615.896.0019  direct 615.593.6340.  Specializing in new home sales in the Greater Nashville area to include Nashville, Murfreesboro, Smyrna, and Spring Hill, Tennessee.

One comment on “Nashville New Homes: Everything’s gonna be all right.”