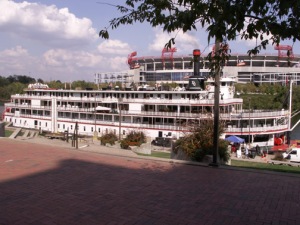 Although I didn’t take this picture, I remember visiting the Delta Queen one evening when it was moored at Nashville’s Riverfront Park in 2007.   The lights were dim, and all was quiet.  Puzzled by this at 9:00 pm, I approached a crew member and enjoyed a great conversation about life on the Delta Queen.  It was dark and quiet because everyone had gone to bed!

Here is a log of a 2007 voyage of the Delta Queen, including its stop in Nashville.     http://maritimematters.com/2010/09/log-of-the-steamboat-delta-queen-along-southern-rivers-part-one/

We have also passed this historic liner many times during recent years on the Cumberland, Ohio, and Tennessee Rivers.   That is a sight we won’t see any more, thanks to the US Congress, who refused to renew the Queen’s exemption from the 1966 SOLAS (Safety of Life At Sea) Act, an exemption that every President has signed since Richard Nixon in 1970.  Read the history of this vessel here:  http://www.deltaqueenhotel.net/#!abouth-the-dq

In February of 2009, the Delta Queen arrived in Chattanooga to become a floating hotel at this city’s vibrant riverfront.   From $89 per night, you can step back in time and experience the closest thing to the “glory days” of river travel.  If you don’t have time for overnight, why not visit for a meal?  Here is a link to the hotel website.  http://www.deltaqueenhotel.net/ 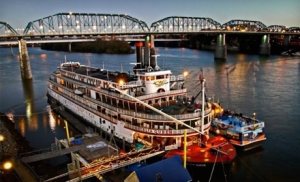 It is interesting that the Queen’s “Brother Ship” the “Delta King” serves in a near identical capacity in San Francisco, where the two began service together in 1927.   http://www.deltaking.com/  Of the steamboats, the Delta Queen and King are among the luckiest.

The Delta Queen Steamboat Company owned three “Queens,” all of which ceased operating in 2008.   The “Mississippi Queen” was launched in July 1976 during our nation’s bicentennial and traveled the inland rivers until being sold for scrap in 2010.  Here’s the story: 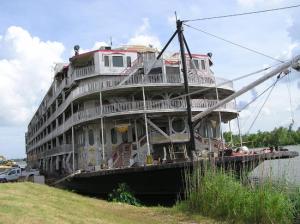 I can remember passing the Mississippi Queen on the Cumberland River several times as well.  What a sight.

The third “Queen” is the “American Queen,” launched in 1995 as the largest steamboat ever built.  For Sale with fate unknown, she sits mothballed in Beaumont, Texas with the US Maritime Reserve Fleet hoping for better days.

When it comes to embracing a city’s riverfront, Chattanooga is light years ahead of Nashville and should be commended for saving the Delta Queen.

With our emerging status as a “world-class” city, would Nashville possibly consider a project using the American Queen at Riverfront Park, or even Opry Mills?  It’s an idea certainly worth consideration…especially since Bill Purcell is no longer in office to deem it a Homeland Security risk to Riverfront Park.  :0)

Even more reasons why Tennessee is the greatest place in the world to live.  Come join us! 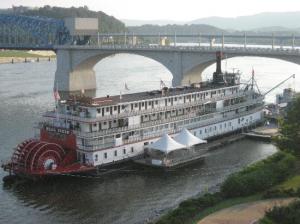 Trey Lewis is a licensed Real Estate Broker in the State of Tennessee with Ole South Realty, 615.896.0019  direct 615.593.6340.  Specializing in new homes in the Greater Nashville area to include Nashville, Murfreesboro, Smyrna, Clarksville, and Spring Hill, Tennessee

One comment on “Spend the night on a real steamboat? You still can in Tennessee!”