Boarding the Carnival Elation at New Orleans was a breeze and we were onboard just minutes after parking the car. Once onboard, you have to get a ceremonial drink to start your cruise. I chose a Bloody Mary since it was before noon.

Carnival Elation is the 7th in the series of 8 Fantasy Class ships of Carnival. It was built in 1998 at a cost of $350 million dollars and was the first cruise ship to ever use “Azipods” for propulsion. If you are wondering what an Azipod is, CLICK HERE.

The Elation and its sisters are considered small ships by today’s standards at 855′ in length, carrying 2052 passengers and 920 crew. No matter what they say, it is still a damn big boat!

We were last on Elation in October of 2011 for its final sailing from Mobile, Alabama. When we returned, it went to dry dock for refurbishment of certain areas and general maintenance. Although it did not get additional balconies or the water park, it still emerged as a new ship and you could notice the improvements on our sailing. 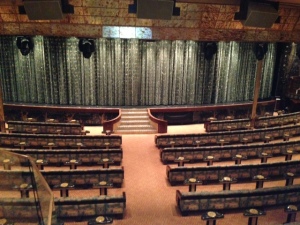 At 1:30 pm, our rooms were ready. It is amazing to me just how quick the ship can be “made new” after each voyage. Off we go to Cabin M22.

Before we knew it, the ship was setting sail.  What a relief – no Homeland Security issues this time!   (READ THIS and you’ll know what I am talking about)

The closer we got to the Gulf of Mexico, the foggier it got.  When you can’t see, just blow the horn and they’ll move right?  Notice the ever-changing lighting effects of the pool.

Carnival just recently introduced the Punchliner Comedy Club on all ships and it is going over quite well.  Comedian Russ Nagel was beyond terrific as you can see from the standing room only crowd!

Another cool event recently introduced is “Superstar Live.”  This is just like karaoke, except you sing with a live band – which happened to be the Carnival Elation show band.  Here is the group “Sexual Chocolate” performing at “Superstar Live.”

I won’t bore you with all the details about the great meals except to say the famous Chocolate Melting Cake has not changed a bit! 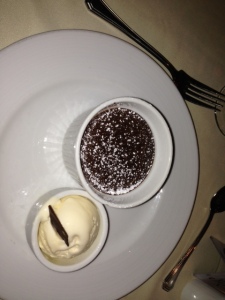 The first Port of Call (formal term for ship stop) was Progreso, Mexico, which to many is a “shit hole.”    For whatever reason, I like this stop because it is the closest you will ever get to “real life” in Mexico from a cruise ship.  It is worth the free bus ride from the pier into town to check things out.   They now have a “bus port” complete with a new straw market, and its even closer to the beach. 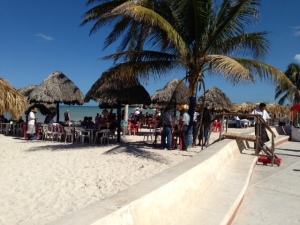 Inflation has struck the beach in Progreso.  A massage that used to be $10 is now $20.  Don’t choke – they will still negotiate!

The locals are on this beach in full force trying to sell everything you can think of…. and a few things you would never imagine.   Don’t let it annoy you.  They are just trying to feed their families and a boat load of tourists are “easy pickings!”

I have found it best to tip the “cold beer on the beach guy” and ask him to keep the other vendors away while you sit on the beach with your cold beer.   That works.

Many musicians stroll the beach at Progreso for tips.

It is especially fun to tip them to play for the people getting a massage.  Thats what I always do. 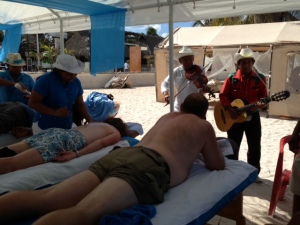 And you can tip them to ride back to the ship with you.  I did that too. 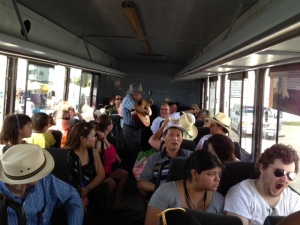 And once back to the Port, there are several bars with a great atmosphere.  Don’t get back on board just yet! 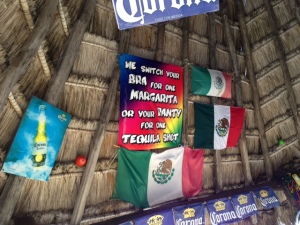 The Port of Progreso is a huge industrial port and cruise ship visits are relatively new in comparison.  Each visit, I can see more and more tourism developing this third world town into what will one day be a thriving resort location.  Just wait and see!

Part 3 finds the Carnival Elation in Cozumel.  Join us there, and also as we head back home on what would become “the drive home from hell!”