Tomorrow evening at midnight, we turn the final page of the book of 2013. It’s a pretty thick book, because lots of great things happened in Nashville this year.

Nashville made the top of just about every notable published list in the country, most recently named among the top places to buy a home by Forbes Magazine.

Downtown Nashville will also be among the top places in the country to be for New Year’s Eve, with Hank Williams, Jr. headlining the “Bash on Broadway.”  This celebration, featuring the “music note drop,” is not to be missed.

We were hoping to take the boat downtown to enjoy the festivities, but once again, our welcoming Metropolitan Government has closed the Riverfront Park Docking Facilities for the festivities.  If a relocating corporation with thousands of jobs onboard were relocating to Nashville by boat on New Year’s Eve, they would be out of luck.  We’ll still be there in spirit!  Hopefully our next Mayor will be a boater.

New Year’s Eve is also the birthday of Ruby, our Blue Doberman, who turns 3 this year.  Here she lies, waiting for her birthday festivities to begin.

Back to sum up 2013.  Nashville was, and really is the place to buy a new home in 2014.  We appreciate everyone that bought one in 2013 and look forward to your many referrals in the coming year!

Trey Lewis is a licensed Real Estate Broker in the State of Tennessee with Battle Ground Realty, 615.593.6340, specializing in new homes in the Greater Nashville area to include Franklin and Williamson County, Tennessee.

Friday afternoon, 8 of us departed Blackjack Cove Marina on Old Hickory Lake for a 46 mile journey down the Cumberland River to Commodore Yacht Club, where an annual brunch was taking place on Saturday.  Since this Sunday was to be the “end of the world,” we weren’t going to take any chances on missing a last river trip.

The weather was gorgeous as we approached Old Hickory Lock.  The lock works much like the tank on your toliet.   Flush to go down, fill it to go back up. There are floating “mooring bits” to tie onto in side the lock. 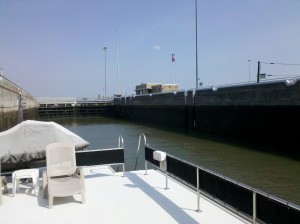 Tied up in the lockExiting the lock

Within minutes, we were flushed down to the river below.  We exited Old Hickory Lock at 4:10 pm.

There are many interesting sites, and a lot of history along this river.  There are also many pieces of residential real estate along the river that most people don’t even know exist.  It was great to see that many homes damaged in the May 2010 flood have been rebuilt.  But there are also those that have not.

There will be visual reminders of this catastrophe for years to come but now is a great time to buy riverfront property for a completely different and relaxing lifestyle.   And even though there is the chance of flooding, the investment potential is great.  They simply aren’t making any more riverfront property!

All of the above scenes were taken on the 25 mile stretch of river between Old Hickory Lock and Nashville’s Riverfront Park, where we arrived at 5:50 pm to spend the night.

There was considerably more barge traffic on the river than usual.  Lots of sand, and even more coal!  It is amazing that each barge can hold the equivalent of 53 tractor-trailer loads of material. 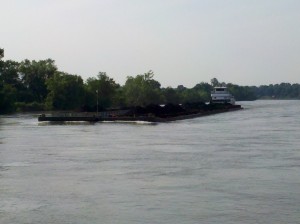 One of Ingram’s boats that I am partial to is the “Martha Denton,” which was named after a dear friend of our family that I have known since birth.  Yep, a long damn time.

Before she passed away last year, Martha joined us for a day on the boat and we learned the history of each individual the Ingram boats are named after.  It is ironic that some of the boats actually seem to take on the “personality” of their namesake!   Seeing the Martha Denton brings a smile every time we pass.  A very fitting tribute to a great lady.

Downtown Nashville is simply beautiful.  The river flows through its center much like blood flows through the heart of the body.  I hope one day Nashville can have a Riverfront to be proud of, much like Knoxville and Chattanooga.  Clarksville has greatly improved their riverfront and docking facilities too.  Why can’t we? 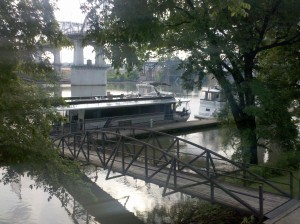 The administration of Mayor Karl Dean is directing much-needed emphasis to the East Bank and it is great to see the progress.  I think his administration just might “get it” when it comes to a viable Riverfront.

Richard Fulton was the first mayor to acknowledge that we even have a Riverfront, and the docking facility we currently have was built on his watch.

Nothing much has happened since then, except for the addition of courtesy docking for LP Field and Mayor Bill Purcell removing docking privilidges during holidays and special occasions under the disguise of Homeland Security concerns.

Perhaps the real reason was that he didn’t have a boat and wanted to get even with everyone that did.  Regardless, it was a stupid policy that remains in effect to this day.

In reality, it is time for all of the docking facilities to be located on the East Bank.  Spend the night on a boat at Riverfront Park, or try and navigate a string of barges under the Shelby Pedestrian Bridge and you too will agree.

Friday evening, it was our intention to hit the nightspots of downtown in a big way.  We never made it.  Too much good food and good friends to leave! 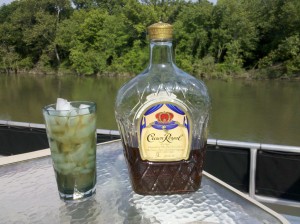 In the next blog post, we’ll look at other scenes between downtown and Commodore Yacht Club, a 19 mile stretch of river.